By Scott David in Devotions on February 16, 2016
No comments

“I can do all things through Christ who strengthens me.” -Philippians 4:13

I remember a book which was read to me as a kid called The Little Engine That Could. You may remember this little engine making his big screen debut in Disney’s Dumbo. The little engine would speak the saying “I think I can, I think I can,” over and over to produce determination while trying to get up a steep hill. No doubt he always accomplished his task because the premise of autonomy was behind both the writer and the train that could. 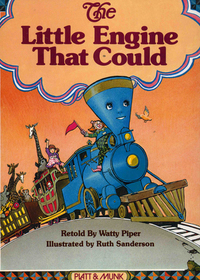 The first time I recall this having an effect in my life was when I was about eight years old playing with a neighbor girl. She was 5 years older than me at least. I was trying to do some hard task on a swing set. I remember being unable to do it. She told me that I just needed to say over and over to myself, “I think I can, I think I can.” I decided to test her hypothesis and chanted the mantra while making yet another effort. Low and behold, I was crowned victorious over the swing set that day, and learned something I would carry with me until the age of thirty; I can do all things!

This autonomous omnipotence was laid down at the foot of the cross in 2003. It was the hardest obstacle which blocked my path to forgiveness. I’m pretty sure I have more autonomous genes in my person than I have blood cells. Not a day goes by that I don’t feel the tug of the little engine calling me to pull myself up by my own boot straps.

“He gives power to the weak, and to those who have no might He increases strength. Even the youths shall faint and be weary, and the young men shall utterly fall, but those who wait on the LORD shall renew their strength; they shall mount up with wings like eagles, they shall run and not be weary, they shall walk and not faint.” -Isaiah 41:29-31